Hero of the year – Jason Day

One of the poignant images of 2015 was Jason Day flat on his back at Chambers Bay. In contention at a major once again, this time it was vertigo which scuppered his challenge. But Day, the fighter that he is, kept going and despite not even able to stand up at times, still managed to finish the US Open in a tie for ninth. Then at The Open he had a putt on 18 to make the play-off. He found the perfect line but it just came up short.

It was another chance which had passed him by and he’d have been forgiven for thinking it just wasn’t meant to be. Fast forward a few weeks and Day was once again in the mix at a major championship – this time the USPGA at Whistling Straits. Leading Jordan Spieth by two shots going into the final round, Day went for the jugular. He set a new major championship record by finishing on -20 – three shots ahead of the American.

It was arguably one the most-deserved major victories in the history of the sport.

Villain of the year – Rory McIlroy 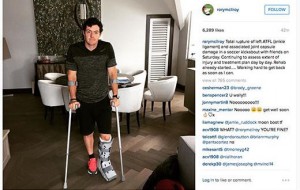 At first I thought it was a wind-up, an internet joke. But the image of Rory McIlroy on crutches just weeks before he was due to defend his Open Championship title was no laughing matter. It was made even less funny after learning he’d sustained the injury playing football.

Rory is a young, fully-fit athlete so has a right to put faith in his body. But I’m sorry, he should have sat this particular physical exertion out. In my eyes it was a huge blow for the tournament and an even bigger blow for McIlroy’s legacy. Opportunities to win The Open at St Andrews don’t come around too often and with his record on the Old Course he was hot favourite to make it major number five.

The result meant McIlroy didn’t return to full fitness until the back-end of the year where he did clinch the Race to Dubai title in impressive fashion. But it meant he ended the season major-less and as the world’s number three player. 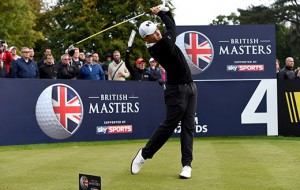 At the end of 2014 Matt Fitzpatrick was ranked 413th in the world after a missed cut at the Alfred Dunhill Championship. The Sheffield native had a quiet spring with six missed cuts and not much to shout about. There were a few saying the former US Amateur Champion had turned pro too early. How wrong they were.

A top 10 at the Irish Open was backed up with three third place finishes and a runners-up spot at the Omega European Masters. To say he was knocking on the door of a win in his first full season on the European Tour was an understatement. And the 21-year-old  smashed through that door at Woburn in the British Masters with a mature final round performance to win by two on -15.

The run of form continued with three more top 10s to finish in 12th in the Race to Dubai and end the season in 47th position in the world rankings. He’s now a red-hot contender for Darren Clarke’s Ryder Cup team.

Under-achiever of the year – Phil Mickelson 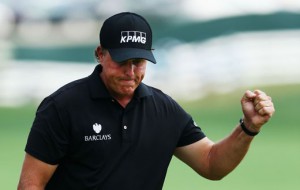 It’s been fun, lots of fun but are we seeing the demise of Phil Mickelson?

Lefty has been in the top-20 in the world for the past 20 years but has now slipped to 27th place. Something tells me there’s plenty of fight left in the old dog yet and if his switch to a new coach can get the juices flowing again then he may just have one more major in him.

Let’s hope so because a world where Phil Mickelson isn’t challenging for majors is certainly a more boring one.

Player of the year – Jordan Spieth

This was easy and could have been handed out after his performance at The Masters which, let’s not forget, was more of an exhibition than a contest. The US Open was more of a dogfight. A three-putt bogey at 17 meant he needed to birdie the last to keep his hopes alive. He obliged and it was enough to heap the pressure on Dustin Johnson who could only make par to lose by one. Going down the 72nd hole at St Andrews, the “Spieth Slam” was still a possibility but he failed to get up and down for birdie from inside 100 yards on 18 and force his way into a play-off.

It showed he was human. But the fact he even had a chance to win three from three was a remarkable effort. Had it not been for an almost possessed Jason Day at the USPGA it would have been three from four. His major record in 2015 read 1-1-T4-2. If that wasn’t enough, he then won the Tour Championship and $10m FedEx Cup bonus. It took his earnings to over $22m for the year – $1m for every year he has been on the planet.